After a palpitating group stage that already left many fans gasping for air with three former World Cup winning sides Spain, England and Italy all eliminated, the round of 16 matches have brought little relief serving up an exciting Holland-Mexico that was decided in the dying seconds of regular time, a Brazil-Chili and a Costa Rica -Greece that both had to go to a penalty shoot out to designate a winner.

I must inevitably pick host nation Brazil’s big scare in  Belo Horizonte against a rising and uninhibited Chili side as the best of the lot since I am  increasingly realizing that witnessing all 200 million+ Brazilians cheer, exult and weep as they live vicariously through their Selecao in this World Cup is an experience I will certainly file as sacred when I leave here.

Chile’s rise
No one knew better than the Brazilians that dynamic Chile, coached by the ascending Argentine Jorge Sampaoli,  would be the first major test of this competition. Sampaoli is a disciple of his fellow countryman Marcelo “El Loco” Bielsa, a genius and purist whose idealism all but guarantees his transience at any job as he is completely intolerant of any outside influence on his work. A hugely influential thinker in modern football for those in the know, Bielsa is renowned for his innovative tactics and particularly his explorations in adding an extra center back to form a three-man back-line and pushing his full-backs deep into the midfield to enable his team to constantly press the opponent in its half, create 2v1 situations on the flanks, win the ball back early and establish its own high tempo short-passing game. All ideas that Sampoaoli, who took over Chili from Bielsa after last World Cup, has internalized, refined and expanded in his 2014 Chile edition. Brazil’s coach Felipao had openly stated he was worried about Chile’s dynamism and he was not to be proven wrong.

A Selecao hampered by cautious tactics
After a nervy start in which the host nation once again failed to establish any semblance of rhythm, Brazil were fortunate to jump ahead via a Chile own-goal in the 18th minute but were unable to hold. Chilean forward Eduardo Vargas  pounced on  a Brazilian mistake in its defensive third and promptly found his teammate Alexis Sanchez with a  a one-touch gem of pass and the talismanic striker slotted the ball home with uncanny calm to level matters the 32th minute. Brazil’s fans throats parched, its players tightened up and from that point on Chili gradually took over the match. All of Brazil’s aforementioned difficulties began to be slowly exposed. 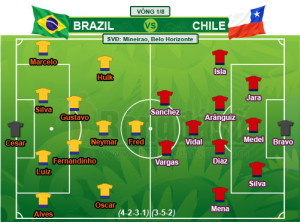 Felipao has always been a cautious coach and this prudence may be hampering his side’s capacity to express itself. Known for its “Jogo Bonito” (beautiful game), Brazilian culture demands that its national team not only win but also entertain. Alas, the Selecao has been struggling with the latter all tournament long. The excuse of nerves which is bandied around a lot has a certain level of validity but the team’s tactical disposition on the field is most likely responsible for the brunt of its struggles. Instead of imposing his own team’s game as one has come to expect from Brazil, Felipao was more worried about defending Chile’s marauding fullbacks and therefore moved his creative midfielder Oscar to the right wing. With Neymar’s mobility limited from a knock early in the match forcing him to stay more up top with point man Fred and with Hulk on the other wing, Brazil’s 4-2-3-1 formation slowly morphed into a stale 4-4-2 with only defensive-midfielders Gustavo and Fernadinho in the center of the field. Chile took full control and in the second half completely dictated match-tempo. They were unlucky not to put Brazil out of their misery on several occasions and in the dying minutes of game when Mauricio Pinilla’s shot slammed off the crossbar, the deepest collective sigh of relief I have ever heard emanated from what seemed like all 200 million Brazilians. 30 minutes of extra time failed to separate the teams and on to the drama and anguish of the penalty shoot-out the match went.

A whole nation weeps
As the people held their breath and watched anxiously, many Brazilians fell to their knees,  bursting into staccato-rhythm prayers to summon the Futebol gods not to abandon the nation. A surreal scene. It was gut-wrenching drama at its best with both teams scoring and missing before Chile’s final penalty shot taken by Gonzalo Jara flew past the outstretched arms of beaten Brazilian keeper Julio Ceasar only to boomerang off the post and offer Brazil salvation. The whole nation simultaneously broke down and wept with its players…tears of relief, tears of pain, of happiness and hope. Brazil were through to the quarter-finals and the nation lives. 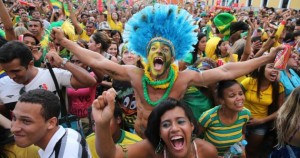