World Cup Watch 2014: The African footballers are coming…but are their federations??? 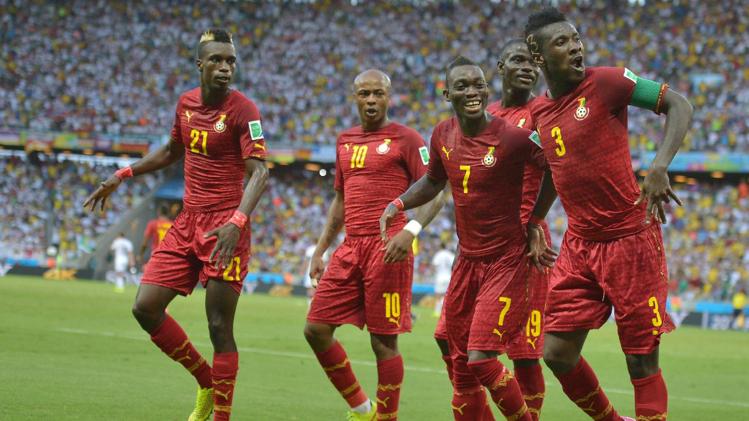 African hopes super-talented Black Stars sabotaged by their own federation.

Football’s undisputed king Pele said over a decade ago that the future of football pointed towards Africa and to begin to substantiate his statement multiple important developments followed, the most eye-catching being talented African players hurdling all obstacles to hoist themselves atop world club football and also integrating premier European national teams. However, football remains a collective effort on and off the field and the final confirmation of a national team from the continent rising to dominate world football is still  pending primarily due to poor management and organisational reasons.

I write this from Rio de Janiero, Brazil the country of football’s king Pele, where I am observing, learning and immersing myself in the mammoth football celebration that is the 2014 World Cup. Most African players recognize themselves in Pele who is issued of African descendants… poor street boy, smart, witty, tricky, agile, creative, technically/physically gifted and with no choice but to quickly become mentally strong as conditions dictated survival or doom. What is also remarkable is that when I look at pictures of a young Pele, I can hardly differentiate him from one of the many boys you would come across on a market day in many a sub-Saharan African village.

Brilliant individual success and some collective promises…
Ever since the superb performances of Cameroon and Algeria in the 1982 World Cup revealed the potential of African football to fans worldwide, many have waited for the confirmation of the promise of Africa with its naturally inventive players who unite technical dexterity , physical prowess and unique mental strength forged in the difficulty of their upbringing. There have been undeniable signs with Cameroon (1990), Senegal (2002) and Ghana (2010) all making storied runs to the World Cup quarter finals.

More significantly, there have been brilliant individual performances. One of the most important is when Liberian star George Oppong Weah broke the barrier to win France Football’s coveted “Ballon d’Or” trophy in 1995 which recognizes the best player in Europe. Weah won the trophy the very first year non-European players playing in Europe became eligible for the prize and confirmation of the individual talent of African players at the top level has continued to grow tremendously from then. An extended list of players like Samuel Eto’o, Mahamadou Diarra, Michael Essien, Didier Drobga, Seydou Keita… have broken into Europe’s elite clubs like Barcelona, Real Madrid, Chelsea and been major catalyst in leading the sides to European glory. Other African-born players like Claude Makelele (DRC) and Marcel Desailly (Ghana) have taken on citizenship of European countries and integrated their national teams to become very instrumental in helping achieve glory. These successes have resulted in the sudden interest and increasingly aggressive delving of European nations into their often-marginalized populations of African-descent as well the nationalization of African-born  players to exploit the talent.

Poor management by federations
But here in Brazil barely beyond the conclusion of the tournament’s group stage, there has sadly been further confirmation that despite all the remarkable individual talent, in most cases the structure that surrounds the African player when defending his national colors continues to fail him and fail Africa. Poor management by football federations, the intrusion of government and political representatives as well as deep corruption continues to cripple the translation of the African players’ talent into similar glory for their own national sides. A symptomatic example is the serial problem of player bonuses. Of the Africa’s five representatives at this World Cup, three have had their promising campaigns marred by the stunning incapacity or some would say unwillingness of their federations to come up with a clear payment system and schedule for player bonuses prior to the tournament. Africa’s record seven-time World Cup participant, Cameroon’s Indomitable Lions 2014 World Cup campaign was sabotaged from the onset as they failed to depart for the tournament on time due to a stand-off between federation and the team over player bonuses. Similar incidents disrupted their 1994 and 2002 campaigns and consequently resulted in poor performances.

Ghana’s flamboyant Black Stars came a sliver away from being the first African team to reach the World Cup semi-finals just four years ago in South Africa. They came to Brazil with a deeper and even more talent-packed squad, sporting the swagger of Africa’s most promising team and rightfully so. Mid-way into the campaign, deep fractions over a player bonus row destroyed unity in the Black Stars camp with key players being sent home and the country’s president astonishingly having to intervene to ensure payment of players. Knowledgeable African football fans will infinitely curse and regret the fact that this incredibly promising team that now possessed that key component of experience to mesh with its undeniable talent and enable it to probably kick down the door of history for Africa into the World Cup semi-finals was sabotaged by its own federation. Despite a last gasp offer by world football governing body Fifa to step in and pay the players up front with the understanding that the payment would be deducted from the prize money paid to the national federation, the Ghanaian federation inexplicably refused and opted for the puzzling option flying in cash. The team never recovered and was eliminated in the first round. The lost opportunity for this talented 2014 edition of the Black Stars is also a major lost opportunity for Africa.

Amazingly there are reports that Nigeria, one of the two African teams to actually qualify out of the group stage, are facing a similar crisis. Scheduled to face France tomorrow in a critical direct elimination round of 16 match in Brasilia, Nigeria’s Super Eagles are in a bonus row with the Nigerian Football Federation and have reportedly missed training. They are fighting to ensure they do not fall victim to the same bitter experience of failing to receive their bonuses from the federation after the tournament as it occurred during last year’s Confederations Cup.

Structural change is needed
Player bonuses as I mentioned are just a symptom of much deeper structural and systemic problems that plague much of African football. While there is no doubt that the intrinsic talent and value of the African player player is world class, a large number of the continent’s federations are caught in a gulf between amateurism and professionalism, lacking the vision or will to adapt to a rapidly evolving modern football environment. Until a clear philosophy and plan is established to in turn execute real structural changes, I fear the Africa may continue to fail to exploit its football talent.

Yes, as Pele the king said a number of years ago…. the Africans are coming – at least their players are – but are their federations?