Hello Miles, how are you?
Doing really well.

What position do you like to play?
I have played right wing and also as a defensive midfielder, but now I play center back.

What qualities does a good center back need?
He must be able to pass out of the back efficiently, be able to communicate to his defensive unit, be strong in the air and be good in 1v1 situations.

What are your primary strengths as a soccer player?
My closing speed and my passing. Also, even though in defense one must have a “low risk mentality”, I have good enough skills to play my way out of pressure when necessary. On the other hand, I need to work on being stronger in the air and positioning myself better.

From travel soccer you were selected for the Advanced Training Program (ATP), then invited to the DC United Academy and finally called up to the US U-15 Boys National Team camp. That is an impressive rise in a short period of time, how have you managed to continue to find success at each level?
Aside from my personal drive, I have been fortunate to have very good coaches. I have also had good players and supportive teammates around me. It is one thing one thing to have passion for the game but you need good coaches and a good environment to be able to learn the game. I also do a lot of solo training in the off season and also in season on non-training days. Watching top professional center backs on TV like Gerrard Pique of FC Barcelona and Jerome Boateng of Bayern Munich has also helped me tremendously.

What was your experience with the Advanced Training Program (ATP)?
I really enjoyed  ATP because of the individual development approach. The program was not so focused on team results but much more about developing and preparing young talented players who aspired to play at the next level. ATP training stressed first improving yourself as an individual player and then learning to be at the service of the team. During matches the coaches challenged us to execute the points we were working on at training such as retaining ball possession and worried less about the result. ATP’s international trips were fabulous and really expanded my horizons. I was exposed to a completely different level of play as it offered me the opportunity to compete internationally against youth academies of professional clubs from Europe and around the world.

What has been your experience with the DC United Academy?
Although I’ve only been there for less than one year, I have been pushed to improve technically because of the level of competition and also my that of my teammates. My passing has improved, my positioning as well and I’ve learned to be much smarter… I  think faster and run less.

I can imagine your recent call up to the US U-15 Boys National Team camp has you excited, can you tell us a bit about that experience.
Yes, getting called up for the US U15 Boys National Team camp has been eye opening. I believe I was identified by a US scout at a Development Academy showcase. My coach informed me one day after practice and I just could not believe it.  I left for Chula Vista California soon after and was suddenly in the company of some of the best players in my age group from all across the country. There were about 36 of us and we trained twice a day. Our daily routine was, breakfast – training – free time – lunch – study hall – training – dinner. We played 3 matches and the head coach was Dave van den Berg.

The speed of play is much faster and there are some critical points you must have to compete at that level such as; thinking a play ahead, knowing where to pass the ball before receiving it, and playing faster with less touches.

What are your fondest soccer memory so far?
Wow, there are a few. When I was six years old I scored 14 goals in a league game. At U-8, in a 6 – 6 tie game, I scored a free kick with 18 seconds left, I will always remember that. My ATP trips to Barcelona, Spain were also fantastic, I got to meet and compete with so many other young aspiring players from all over the world. And of course getting invited to the US U-15 Boys National Team camp.

What is your favorite subject in school?
History. I always seem to learn something new about the world.

How do you balance studies and the demands of soccer?
It is quite challenging. I stay at school to finish my homework and sometimes have to miss hanging out with my friends and other social stuff. After the U-15 National Team camp, I had to spend time catching up on school work. 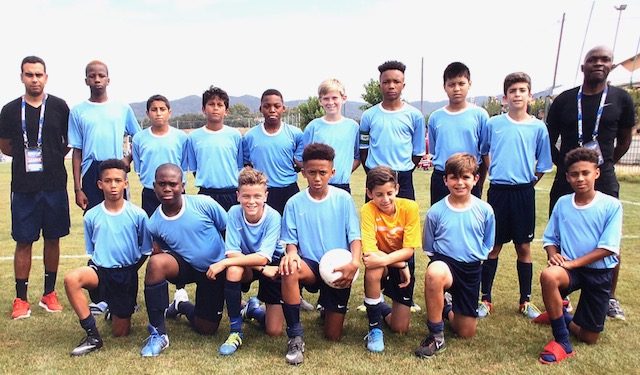 Do you play an instrument?
Drums and saxophone…but not so much anymore.

Are you learning any other languages?
I have been taking Spanish since kindergarten. I want to learn French.

Who are the people or role model that have influenced you?
My mom. She helps me with everything and I mean…. literally everything! I owe her a lot. I’ve also had some great coaches who cared about me and gave me advice on but also off the field.

What is your favorite food?
Spagetti and I also love steak.

What artist or music are you listening to these days?
Drake, and Meek Mill…particularly before matches.

Who are your favorite soccer players and why?
Jerome Boateng, because his aggressiveness and passing. He is also a nice person who does a lot through charity. I also like Gerrard Pique because he is a leader, has a high soccer IQ and also great technique.

What is your biggest strength?
Perseverance through hard moments. I participated in a charity event called Feast of Sharing where we fed homeless people. I met a lot of people who have had difficult times and their stories reinforced the importance of  perseverance to me.

What is the trait that you need to work on the most?
Balancing soccer and school.

Any words of wisdom you would like to pass on to younger players?
Stay focused, avoid bad influences. Coach Sona who influenced my game a lot underlined to me to always have a good mentality on and off the field because you never know who is watching.. This has proved true. I have also learned that when you are criticized, and believe me you will be… it is best to talk with your feet. 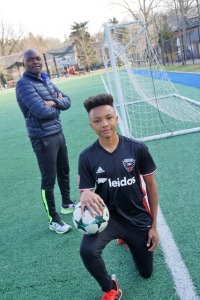