The Eagles have landed – on D.C. United’s U17 youth team 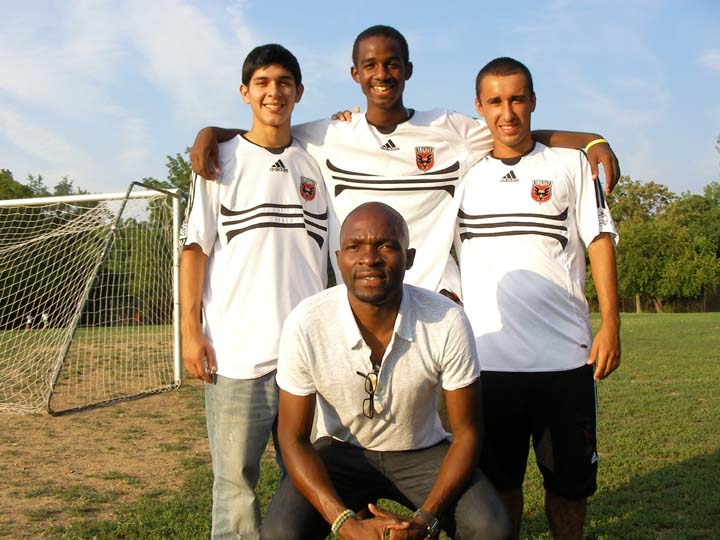 “Play together.”
Over the years, coach Sona Walla’s signature mantra propelled his DC Stoddert Eagles from U9 fledglings into the NCSL Division 1 stratosphere as teens. Now, three talented alumni are playing together again—this time on D.C. United’s U17 Youth Development Team, champions of this summer’s first ever Major League Soccer youth cup.
That victory, which includes representing the MLS at a youth tournament in next August, not only capped an “awesome” experience for high-school phenoms Hudson Batista, Marcus Douglas and Michael (“Mikey”) Funes. Fielding three such top-tier athletes also marks a triumph for DC Stoddert Soccer’s philosophy of developing players rather than focusing on scoreboard results. “It really quantifies everything we are trying to do,” says Sona, former boys’ developmental director, who hopes to spread skills-based training throughout the club in his new perch as Boys’ Technical Director.
For parents, the trio’s trajectory validates the notion that players need not stampede to suburban clubs to reach the game’s highest levels—or to get noticed by college recruiters. Hudson ’s mom, Margaret Finch, who has logged 10,000 miles traveling to games up and down the East Coast so far this year, believes her son and his former Eagles teammates “owe their success” to Stoddert Soccer’s training approach. “Sona taught them technical skills, so it is not just about speed and power,” she says.

John Maessner, D.C. United’s Director of Youth Development, has “developed a pretty nice relationship” with Stoddert Soccer and believes Sona and the club are “doing a great job” grooming competitive young athletes. “We definitely value his opinion of whether a player has talent,” says Maessner, noting that D.C. United’s youth academies rely on players forged by Washington-area club teams.
Not that the Eagles—the first team Sona coached out of the developmental program—soared from the start. Marcus, a junior at Gonzaga College High School in the District, played baseball when he tried out for the team eight years ago. His ball-control skills were negligible, but his speed “blew everyone away,” recalls Sona, who selected him for the team.
Mikey, an exceptionally creative forward who attends Magruder High School in Rockville , began booting around a ball at age four. So did midfielder Hudson, now a senior at Bethesda ’s Walt Whitman High School . He was so possessive of the ball as a tot that he would protest whenever someone took it from him, recounts his dad, Fernando Batista, who signed Hudson up for a Stoddert U7 recreational team, the Kangaroos.
The U10 Eagles started out near the bottom of Division 5 in the spring of 2001. Around age 12, Marcus was the first to catch fire and his desire to win pushed his teammates to give 100 percent on the pitch as well. Four years later, the Eagles rocketed into Division 1.
Mikey and Hudson recall Sona’s practices as “very technical” and “very disciplined.” All particularly remember the “mental training” – much of which occurred off the field, driving to games or in practices—that taught them to size up the competition, change tactics and play hard despite the score. Stoddert Soccer and Sona “really emphasized all aspects of the game, like possessing the ball and being patient” notes Hudson, who values most of all the “technical ability” that Sona and the club’s philosophy instilled. “Secondly is my soccer brain, which they developed as well.” Hudson believes that learning to “embrace technique and skills” now gives him “an edge against opponents.” And because Sona taught him “how to play the game so well tactically, I feel that it makes my technical ability so much more threatening as a player.”
“He shaped my game,” agrees Marcus, who credits Sona’s technical work—especially having to play different positions—for honing his abilities the most. “I used to be all about speed, just running past the defenders,” says Marcus. “Now I can switch positions, to the right outside midfield and defensive midfield.” Mikey, who played goalie for the Eagles, still plays backup goalie for his high school and D.C. United teams. 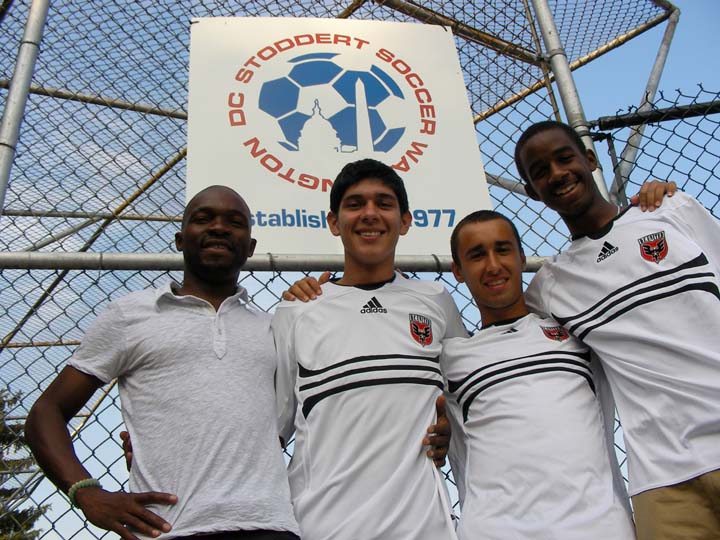 The ability to vary positions proved crucial during the MLS youth cup championship game in Denver last July, when the D.C. United youth team was down to 13 players because the goalie and one defender got red-carded and the captain got hurt. The three former Eagles players comfortably shifted roles—including Mikey, who stepped in as keeper—something teammates from other clubs found difficult.
Like many high-level players, Hudson , Marcus and Mikey sought outside training opportunities, including the Olympic Development Program and Adidas’s ESP league. However, they have had to abandon other pursuits—Marcus, for instance, no longer plays baseball or basketball. And all considered leaving D.C. Stoddert for marquee suburban clubs, particularly when the Eagles dropped back from Division 1 to Division 2.
In high school, with college looming, all three left the Eagles. “It was like a divorce,” recalls Hudson ’s mom, Margaret Finch. Mikey, the first to go, left for Potomac . Marcus joined him for a season, but returned to D.C. Stoddert because he wasn’t developing—or getting much coaching. Such clubs are “just looking for wins and if you don’t make it, they cut you,” explains Marcus, who saw his undefeated Division 1 team bring new kids to practice the minute the team started to slip. “I still enjoy soccer,” says Marcus. “But people who go to [ Reston ]. the Bethesdas, the Potomacs, if they had been there their entire soccer careers, winning is all they know.”
D.C. Stoddert produces winners, too, of course. One reason is because the club takes player development so seriously. The club offers free coaching courses and player clinics. All coaches, even parent volunteers, are required to have a USSF license, and DC Stoddert has nearly a dozen individuals with the highest ratings—including the USSF “A” License and National Youth License.
DC Stoddert hopes to build on that foundation with a club-wide technical program. Experienced coaches have been hired to work with staff coaches and help guide skills-development in each age group. In addition, the club has assigned two veteran developmental coaches—Sona and Karen Kelser—to newly created positions as technical directors. The goal, explains Travel Director Kate Samsot, is to create a competitive, fun program “that ensures players the best soccer education possible.” That includes, she notes, professional coaching that develops a young player’s “techniques, fitness, mental toughness, tactical knowledge, and passion for the game.”
In short, a club-wide program similar to the Eagles’ training. As Boy’s Technical Director, Sona will be working to institute an age-appropriate curriculum so that all U9 teams, for instance, “learn the same thing.” He is rotating from team to team to make sure the new training gets implemented, technically and tactically. At the younger ages, nine and below, 100 percent of the focus is on technical skills. It’s all about “developing a relationship between the player and ball,” says Sona—notably dribbling, passing, trapping and shooting. (Why do you think our kids have to bring their own ball to practice?) As they get older, players are expected to be able to do certain things—so the training focus shifts to strategy and tactics. By 13, when players often begin looking at playing with a higher level team, that’s when they should begin to develop a broader view of the game: how do the four defenders work together and so on. By 16, it’s mental strength and fortitude—and the importance of winning.
Personal commitment is crucial. As D.C. United U17 members, all three former Eagles—who worked as assistant coaches in Sona’s summer development camps—have had to give up club teams and all other sports activities except high-school games. They practice year-round with the best 16-year-old players in the area and play on the nation’s top youth team. Their high-school games include some of the East Coast’s strongest competitors. College coaches and the U.S. National Team coach watch them scrimmage. For Marcus,

however, little will top the thrill of standing in the Denver stadium this summer as youth-cup champions – except perhaps getting asked for his autograph in the airport as his teammates carried home the trophy. His advice to young players: “Listen to your coach.”

For Sona, the trio’s success validates D.C. Stoddert’s approach to coaching and training. If soccer is going to grow in here and throughout , he says, “we have to crate better players and to create a better environment to develop those players.”
Right now, though, D.C. Stoddert is investing time and money developing players that get recruited by—and sometimes go on to glory in—suburban clubs. But the true mark of competitiveness concludes Sona, “is not how many games you win, but how many players you produce.” It is heartening to know that DC Stoddert has helped forge three such top-tier athletes. Their journey has just begun, and we look forward to celebrating their future soccer successes.
by Mary Lord
September 22, 2007