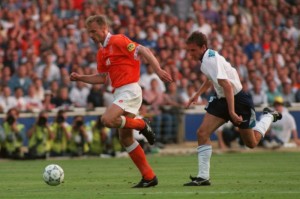 Dennis Nicholaas Bergkamp is one of the the finest footballing jewels to be honed at the famed Ajax Amsterdam and Dutch youth development system before being released unto the world to soothe the aching hearts of football purists. He duly obliged but the ease with which his inventiveness enabled him to create and score goals may veil the tribulations he endured on the path to express the genius his formative club Ajax so freely allowed him to develop.

Bergkamp’s story is one of a young talent’s perilous but necessary brush with failure that  preceded success. After the nurturing of his natural talent into a potent, educated attacking force in the legendary sculpting-hands of Ajax, he moved to Italian powerhouse Inter Milan in 1993 at age 24 where he struggled for two years. The usual barrage of obvious facts, speculative assumptions and hasty conclusions were advanced as explanations for his hardship – change of culture, different football approach, over-hyped  talent – but the reality remained that he was left staring squarely at the abyss of the “unfulfilled potential star.” In search of an opportunity to re-launch his career, he had the fortune to land in the cocoon of French master-coach Arsene Wenger at Arsenal 1995 . Immediately recognizing Bergkamp’s superb technique and need for freedom to express his unique creative capacity, Wenger who is known for transforming young talents into world-beaters deployed the Dutchman as a withdrawn forward with the licence to roam in the space just underneath the point-man. When the swift and direct French forward Thierry Henry arrived a few years later to spearhead Arsenal’s attack, he and Bergkamp formed a dream partnership that went on to shower fans with oodles of breath-taking goals.

Yes, Dennis Bergkamp won three Premier League titles, four FA cup trophies and helped Arsenal reach the 2006 UEFA Champions League Final. Yes, he scored 37 goals in 79 appearances for the Netherlands and twice finished in third place in the Fifa World Player of the Year award. But statistics simply fail to provide an accurate depiction of the genius of Dennis Bergkamp. I was one of those football purists suffering a slow death from the ever-increasing elevation of athleticism over technique and creativity in football and I must confess that Dennis Berkgamp’s penchant for scoring stupendous goals did soothe my soul when he played.

In my visits to Ajax Amsterdam, I have often asked questions of those who played with him or who were around to witness about exactly how his nascent talent blossomed into the fabulous player he later became. The answers seem to revolve around the notion of freedom. Ajax spotted Bergkamp’s unique talent at 11, an age where in football cultures players have already developed a strong enough technical base and insight to allow them to begin expressing their personality within the game. It was this that Ajax identified, molded and developed all the while being careful to provide the freedom necessary for its expression. Years later at Arsenal, Arsene Wenger also recognized that a certain liberty was vital for a player of such unique unpredictability to fully express himself. 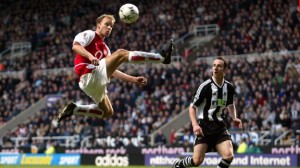 The Flying Dutchman in action for Arsenal

When I had the opportunity to meet and talk with Dennis Bergkamp at the the Ajax training center the Toekmost recently during a coaching symposium, I was astonished at how simple and soft-spoken he was for a man who had unleashed such blissful fury with his magical feet in stadiums all around the globe. After retiring, he is back at Ajax to help guide and transmit his experience to the youth and also is an assistant to first team coach Frank de Boer. Dennis Bergkamp spoke effortlessly of football and the importance of prioritizing player development over winning. He spoke of the need for youth coaches to create environments that encourage inventiveness, that let players explore and make mistakes in order to succeed. He spoke of freedom and of football as a simple beautiful game, an extraordinary vehicle for young people to express themselves.

In our modern and ultra-scientific football world today, players run faster,  jump higher and are all perfectly tactically-drilled but the space to allow the creative genius to blossom seems to be progressively shrinking. Matches are quicker, physical battles more intense but play seems to be increasingly predictable and less magical. Listening to the advice of some of football’s greatest creative geniuses like Dennis Bergkamp may help re-instill some of that lost magic back into the game, making it more beautiful.