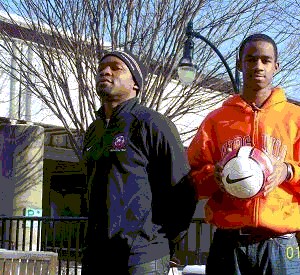 Marcus Douglas is one of the many outstanding young individuals who have come through DC Stoddert Soccer.

Born and raised in Washington DC by his parents Kelwin and Gina, his natural talent quickly earned him a spot in DC Stoddert’s Developmental Program at the age of nine. As a member of the DC Stoddert Eagles travel team from U-10 to U-15, he would develop under the tutelage of Coach Sona Walla and become one of the Washington Metropolitan Area’s top youth talents . At 16 he was invited to join the highly-regarded D.C. United Academy where he played for two years in the prestigious US Soccer Academy League that gathers the top U-16 through U-18 players in the country. With a number of options beckoning, he decided to attend University of Virginia and in his freshman year has had the tremendous experience of being a member of the team that recently won the 2009 NCAA Division 1 men’s title–upsetting Akron in a 3-2 PK shootout after 110 scoreless minutes.

DC Stoddert Boy’s Technical Director Sona Walla caught up with Marcus in January to chat about school, soccer and life in general.

*Marcus, Happy New Year, how are you?
Great, it’s feels good to be home.

* You are mid-way through your freshman year in college, how does it feel?
Wow, it’s been really busy. Academically, I have been adjusting to the bigger workload and more rigorous requirements of college. In soccer, I have been getting to know my coaches, my teammates and learning a new system of play.

* Why did you choose the University of Virginia (UVA) and how did that unfold?
UVA identified me during one of my matches with the U-18 DC United Academy team the summer of my junior year in high school. Assistant coach Mike McGinty approached me and we chatted a bit. I already knew they had a great program but I decided to research a bit more. When I visited the campus, I instantly fell in love with the school.

* What do you like most about college life and what are the biggest adjustments you’ve had to make?
Let’s see, how do I put this (smiles) – Not being on parental watch 24/7 is great, but it does comes with responsibility because you are in charge of yourself. In college I have had to adjust to staying up late sometimes till 2:00am just to study and still get up early in the morning to attend classes.

* What do you miss the most from high school life?
Oooh, the studies were much easier in high school and I had a lot more time on my hands. I also miss those occasional easy soccer games where I could get away with relaxing and not having to go 100% all match. I have not seen any of those in college.

* You grew up playing travel soccer at DC Stoddert, joined the DC United Academy at U-16 http://www.stoddert.com/home/206068.html and are now part of the University of Virginia team that has just clinched the 2009 NCAA title – why have you stayed with the game and how have you managed to find success at the various levels?
My Mom took me to play soccer when I was young because she said I had “too much energy” and was tearing down the house. I liked to run and instantly loved soccer. I was a good athlete and joined the DC Stoddert Developmental program at nine where coaches stressed to me that if I developed my technical skills I would enjoy the game even more. I have continued to work very hard at training and I also watch a lot of soccer. I watch professional players, my teammates and really anybody because I am always looking to learn something new that I can integrate into my game. I have a long way to go and cannot speak of success. Working hard to improve my skills and never giving up like Mom and Dad always said is why I am here today.

* What did you learn from your DC Stoddert experience and how has it helped you?
Technique, technique, technique! DC Stoddert gave me the technical base that has helped me cope at all the various levels of the game I have played. From a very young age, the Stoddert coaches always stressed – “Better technique, dominate the ball, improve your relationship with the ball, solve problems with skill and intelligence”. I learned over time that a strong technical base is critical because it buys you time on the ball and offers you options. At Division 1 college level you get no time on the ball.

* What about your DC United Academy experience?
The DC United Academy was a step up from travel soccer because I was mixing with the best players from the Washington Metropolitan Area which is rich in soccer talent. The Metro Area is awesome, you meet kids from everywhere in the world. Playing in the US Soccer Academy League with DC United against the best kids in the country was fantastic. The big difference was the “speed of play” which I was able to adjust to because of my technique and speed. It really prepared me for college where the speed of play is even quicker with bigger, older guys.

* Talk about your freshman year at University of Virginia which has culminated in the NCAA Division 1 men’s title? http://voices.washingtonpost.com/soccerinsider/2009/12/virginia_wins_ncaa_title.html
Oh man, what a ride! From the very start I felt we had a good team, but it really dawned on me after our first victory over University of Portland. After that things just started to click. As a freshman, I watched and learned a lot from the older players who really nurtured us. Young players have to learn the system of play of the team and what the coaches expect. We have great team spirit at UVA and our NCAA Division 1 title basically comes down to solid teamwork.

* I am sure it has not always been smooth sailing, what have been some of your challenges?
I have never been the biggest, strongest guy and at every level I have played I have had to learn how to cope with the physical side of the game. I have always been a hard-nosed player and that along with my combination of skill and speed have been the key.
Another challenge has been learning to fight through slumps. You just have to believe in yourself and keep giving 100% at training. Even the best players in the world have slumps.

*You have always been a strong student, how have you managed to balance studies and the demands of soccer?
UVA is very serious about staying on top of its student athletes. Mandatory study halls, tutors, checking class attendance… They are pretty strict about that. I do my part, no problems.

* Have you decided on a major yet?
No.

* Who are the people or role models that have influenced you?
My parents, they taught me never to quit.

* What are your other interests?
To tell you the truth, between school and soccer I have no time left these days. My roommate and I play video games when we have down time.

* What are you listening to these days in your IPod?
Our UVA team has a lot of different personalities from various backgrounds. Our team song is “Party in the USA” by Miley Cyrus. DO NOT ask me why but it gets the guys pumped.

* It is a World Cup year, what are your thoughts on the USA’s draw and its chances at South Africa 2010?
Good draw. We need to get at least a tie against England and not underestimate Algeria and Slovenia.

* Who is your favorite American soccer player?
Clint Dempsey of Fulham.

* Your favorite non-American soccer player?
Robinho of Brazil, Thierry Henry of France and Iniesta of Spain influence me the most. I watch them because my characteristics as a player are similar to theirs.

* What is your biggest strength?
My combination of technique and speed and learning what I must do to improve myself.

* The trait or characteristic you need to work the most on?
On the soccer field, I continue to work on improving my decision-making. In top level travel soccer the game was quick, in the Academy League it got quicker and at Div.1 college level where players are bigger and older I must decide what I want to do before I receive the ball.

Off the field, I continue to work on staying focused and not procrastinating.

* Any words of wisdom you would like to pass on to younger players?
Yes! “Hard work beats talent when talent fails to work hard”. And that is for real.