Futsal with its fast pace and tight spaces demands a higher level of technical skills from the player and has been the development ground for many top level players in foreign soccer cultures. The USSF Development Academy has decided to add Futsal to its program with the goal of producing more creative players who will have a better relationship with the ball.

Development Academy to add futsal to curriculum this winter

U.S. Soccer sees futsal as a tool to improve the technique of youth players across the country. 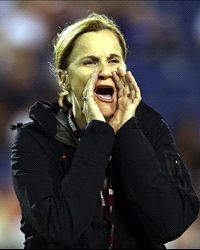 Next season, the USSF’s Development Academy will add futsal to the curriculum at the U-14 age level.

To help expose clubs to the five-a-side game and smaller fields, U.S. Soccer hosted two showcase events on the tennis courts at the Home Depot Center this year, laying out a blue surface and goals.

“The obvious benefits to their ability to play in tight spaces,” U.S. Soccer women’s development director Jill Ellis told Goal. “It just demands a higher level of control. Things are happening faster. I think it’s great for the goalkeepers because they have to use their feet a lot. It just ties in directly with the message of more technical players. I think it’s a great partnership – futsal and technical development.”

“It’s the benefits you get from futsal: It’s the touch on the ball. It’s the technique. It’s the four guys on the field – the angles you create, those triangles,” Development Academy technical advisor Rob Becerra said. “They’re still having chances to get programming, but this is alternate programming. It’s going to enhance their players’ experience as a player over a 10-month calender season, so things don’t get stale.”

Becerra wore shades in the relentless California sun, but pointed out that other locations across the United States don’t enjoy perpetual summer. He estimated that Development Academy clubs pay up to $2,000 a day to train on turf during winter. With four mandatory days of training a week to join the DA, clubs could save several thousand dollars by adding futsal, whose courts are cheaper to rent.

“Futsal was always in the thought-process when they were creating the academy,” Becerra said. “But now bringing it together to fruition in year six of the Academy, I think that’s the right timetable with this age group.”

The U-13/14 Pateadores boys’’side and West Coast girls’ team won the most recent invitational, which wrapped up on Wednesday.

Even without a female version of the Development Academy, Ellis thought futsal could benefit the women’s game. She pointed out that Japan winning the World Cup in 2011 altered the thinking in the quickly evolving women’s game, a “benchmark” moment when technique usurped physique.

“I was one of those people who thought, ‘Well gosh, are we behind’. But I’ll tell you, in the past three years we’ve got a lot of very technical players,” Ellis said. “The issue now is we want to make sure our athletic players are also developing technically. … Now I think the push is to encourage our clubs to develop the technical players.”